This blog entry is the second follow up to our challenge to develop top 10 Reasons to Stay Married.

I remember one day talking to two of our youngest children about what life would be like for them if my husband and I split up.  It was during a time when arguments between me and my husband seemed to erupt with increasing frequency.  Our youngest children were adolescents at the time and I was concerned that the discord was especially having an adverse effect on them.  I was also considering possible living arrangements in the event that a divorce actually occurred.

In response to my bringing up a “what if” concerning a possible separation, my daughter looked at me and said that it “would be too weird.”  My son sort of chuckled and said “mom, stop playin.  Don’t even think about it.”  “Dad ain’t goin nowhere.  And you definitely ain’t goin nowhere.”   At that point I began to consider that a divorce would have a real negative impact on our children.  But what I

expected was even more of an issue was how their perception of us would change.  Our children were confident that they knew us and could depend on us.  I pondered how important it is that children believe that they know what their parents would or would not do.

I have learned that children need stability and truth from their parents in order to nurture healthy attitudes in them.  One time, our youngest son was behaving like he had a huge grudge against the entire family.  I finally decided to explore his issue because I was weary of how much his attitude was disturbing the peace in our home.  I was surprised to find that our son was actually upset with my husband and me because we did not take them out like we had agreed to do.  We had come home really tired and asked if we could reschedule an outing to a restaurant that we had planned with the children.  Our son’s whole issue was that we did not keep our word.  I later found out that all of our children expressed that it really bothered them if we cancelled something that we agreed to do for or with them.  I also noticed that they were becoming increasingly unenthusiastic about planning anything together.  I reasoned that this was because our children had grown to distrust that we would actually follow through as planned.

Eventually, my husband and I discussed this issue and made a conscious effort to refrain from breaking anymore commitments to our children.  I decided that I would do everything in my power to keep my word to our children after seeing how much it meant to them.  I realized that this meant that this was another reason to keep

the issue of divorce off the table.  But since divorce was not an option, we had to learn how to get along and develop better communication skills- even if just for the sake of the children.

I must admit that there were times in our marriage where the disharmony in our marriage seemed too much to bear, even for the sake of the children.  There were even times that I convinced myself that the children would be better off if my husband and I lived separately because we would have such hostile disagreements.  I thought that our children would have a more peaceful existence because they would not have to be subjected to our violent, mean spirited bickering.

But I had not realized how much our staying together was teaching our children valuable lessons.  For example, they later expressed how much they learned that people can stay together and work out their differences if they love each other.  Although they hated when we argued, they began to trust that we knew how to work things out because of our love for each other.  It also showed them that we 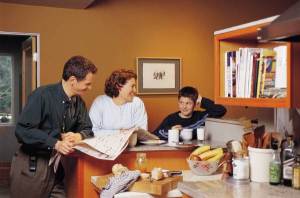 cared about them and each other in a way that was self sacrificing.  They appreciated that we were considering their feelings even more than our own.

In today’s society, I hear too many people who simply do not have faith in marriage because of the many examples of divorce in their own families.  I believe that if parents continue to teach children that marital relationships can be easily broken that our society will breed a generation of adults who lack community and commitment in general.  I believe that on a broader scale, this will perpetuate a lack of trust and integrity that will hurt our overall progress – socially as well as economically.

I believe that when parents do not consider the impact that their decisions have on their children, that they risk steering them in ways that they are sure to regret later.  For example, I did not want to influence my children to think that it was acceptable to be unreliable.  I did not want to teach them how to go back on their word in matters of love, education, business or life in general.   Today, I am so happy that our children were factored into the reasons that my husband and I stayed together.

Blessed to be the father of five children, I have had a number of their friends to claim me as their surrogate father. I have also had a number of much older people claim me as “dad”.  Some were even older than me, which felt awkward at times. More importantly, this represents a haunting void that is present for so many people in our society, it seems clear that strategies for effective parenting and keeping fathers in the home are desperately needed.

My children did not grown up in a home where there were no arguments or slammed doors. However, they did grow up with the benefits of a two parent home. Raising children with two parents is hard enough without the added pressures of adjusting to divorce. I am not holding my wife and I up as model parents. However, I know from the testimonies of our children that they truly appreciate our commitment to working things out while refusing to let them suffer

through a difficult and traumatic divorce.

Children do not get to choose their parents and of course there are good models and bad models of parents to examine. In retrospect, I doubt that there is a “perfect and trouble free” model of a family. Even the first family recorded in the Bible of Adam and Eve reported a sibling murder within their family. However, that does not prove that the best model for a family is not with a father, mother and children.

The importance of the welfare of the children is often demonstrated by the level of sacrifice that many parents adopt as acceptable.  Even in marriages where the parents have fallen out of the affectionate and intimate relationship they once enjoyed, parents are often willing to continue sacrificing and providing for the welfare of their children.

I cannot imagine anything more important to the welfare of those children than the combined efforts of the parents, some great friends and some skilled and knowledgeable professionals to build competencies to repair fractured and stressed relationships.  Sometimes extended family members (in-laws) can assist as well, but those models appear to be less common.

Tragically, and far too often, grand parents, aunts and uncles have been compelled to assume parental roles due to the toxic and violent nature of a distressed marriage. In that case, neither of the parents appear to be a good choice to oversee the welfare of the children. Regrettably, even this scenario is not always ideal for raising children. The worse case scenario is often when the courts rule that the children are to be seized and placed into foster care systems. There are far too many horror stories associated with foster care to outline in this brief article.

Another side of this argument usually sites that children do not benefit from being in relationships that are toxic and even violent. I agree with that point. However, the alternative should be framed carefully and with consideration for the long term negative effects of children being separated from one or both of their parents.

I believe that far too frequently couples head for divorce after failing self-help strategies that were not well though out or just not effective enough to handle the complexity of their problems.  I have also found that couples that seek a team of helpers that can address all sides of the marriage are far more successful in

preserving their marriage than couples with self-help strategies. Effective strategies allow the children to gain the benefit of watching mom and dad work through issues rather than bailing out and leaving the children with feelings of abandonment.

The effective solution to marital issues that threaten the integrity of the family is not his way or her way but a new way that is framed with the understanding that the children’s financial, social, and emotional well being are part of what is at risk. That is why it is critical to seek comprehensive solutions that heal the whole relationship and develops coping tools to provide sustained results.

Rather than make a choice that is based solely on the children, I believe you can make the choice considering all the issues while acknowledging the weighted importance of the welfare of the children. Often there is a need for real change that is not easy to develop but critical for the sustainability of the marriage and family.

depression, suicide, in addition to poor performance in school. Additionally, children experience  post traumatic stress from the parental battling while being uprooted and moving to new neighborhoods and schools. This is not to say that there are not exceptions to these statistics.  You may be one of those super parents that has done an awesome job raising your child after experiencing a divorce. If that is your testimony, I applaud you and hope that you can write a “How-to” book that will teach others to do the same. However, this article is only to highlight the increased risks concerning children of divorced parents.

In conclusion, I believe the greatest asset any community has are the families that learn the competencies needed to sustain a marriage and keep a family together.  My hope was to present one the greatest inspirations to fight for your marriage and your family.

Great marriages are not free from verbal fighting but they do learn how to verbally fight fair and avoid destroying the most precious gems in the eyes of their children, their parents and their family. Working through struggles and finding equitable solutions serve to teach invaluable lessons of conflict resolution and to build resilience into the character of your children.