For years, my family would refer to me as the one “who smells everything.”  From smelling my food before eating it to being able to find the source of foul odors, I have been the one to call.  I finally realized that my keen sense of smell was directly linked to my memories of sexual abuse as a child.  This sensitivity to odors facilitated some of the triggers that occurred while sharing intimacy with my husband.  Without the ability to separate the good from the bad, there were times when our lovemaking crumbled into frustration and tears.  I would experience flashbacks so vivid that I would need to put on my glasses or be in a lighted area so that I could clearly see that it was my husband in front of me.

Other areas of triggers included certain types of touching, certain foods and the one that was most challenging- the timing.  Because I was often awakened from sleep by the man who began molesting me, my husband had to deal with my harsh response to his attempt to wake me up to engage in intimacy.  No matter how gentle his approach, I would often respond startled and sometimes even angry.   My particular issue has been compounded by the fact that my experience with sexual abuse included re-victimization.  Re-victimization from child sexual abuse is when someone experiences multiple instances of sexual assaults from various perpetrators at different times.

I express my own encounters with re-victimization from child sexual abuse through adulthood in somewhat graphic detail in my book, “When Girls Don’t Tell.”  I include specific details in my book because my counseling revealed that many women and 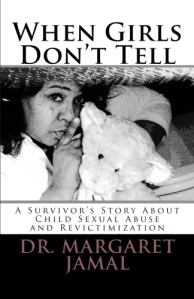 girls have experienced this without realizing it.  Consequently, their marriages suffer largely due to their not recognizing or acknowledging their own extent of victimization.

The Scriptures teach that we should meditate on whatever is good.  I was not able to do that at first because I did not have enough “good” that was suitable for reflection.  After completing my book, “When Girls Don’t Tell”, I began to experience the relief that comes with being able to confront those issues of abuse that can be haunting and hold your thoughts hostage.

Ultimately, my husband’s patience coupled with my faith in God, helped me to replace the bad memories with new good experiences to fill my thoughts.  Yet I remain aware that recovery from sexual abuse is a journey rather than a destiny.  I believe that couples who recognize this will have a great chance (with the help of the Holy Spirit) with overcoming the painful challenges and enjoying a happy and fruitful marriage.

During a season of trust and peace, I found myself reaching out to touch my wife in a non-sexual way. We

needed to rebuild a level of intimacy that was real and uninfected by the abuse she encountered as a child and later on even as an adult. We had long talks and we laughed out loud at stories of our past. We prayed and we cried. We wrote to each other when talking seemed to fail our attempts at explaining what we felt.

To quiet the noise adding to the stress and challenges of working on our marriage, I would often retreat to my music, sports or writing. Confronting my own fears of being incompetent to help the woman I love became an issue as well. However, with the help of music and our interactive writing I began to refocus and use my God-given talents.

Blessed to be able to write and express our thoughts, we both began to blog and write books. I expressed how proud I was of the incredible courage and strength she showed in sharing her story with the whole world in her book “When Girls Don’t Tell”. Our children and I also assured her that her past had not defined her and that her story was still being written with the best still to come.

We still struggle at times in our communications. There are still times when there appears to be over

reactions and outbursts that I cannot explain. At times it appears as though there is an entity translating what is being said into something other than what is intended. Sometimes I fail to be sensitive or attentive enough to address her needs and have to slap myself out of dwelling on my own disappointment. I try to be both empathic and strong while remembering that the constant reassurances that she needs are not evidence of my faults but evidence of the hard work required for this marriage.

I can tell you now without any regrets that the hard work was and is worth it. I am blessed to be in the incredible marriage I have with my wife. I enjoy her verbal guidance that helps me to understand what is going on with my wife. I am improving in my listening skills and constantly pray for wisdom.  However, I am keenly aware that my marriage is not the norm. Due to the vast number of spouses that go through life shrouded in secrecy and shame about the hideous sexual crimes that robbed their innocence and tainted their view of sex, our marriage represents a small minority.

With sexual assaults at alarming rates within our homes, prisons, military and school settings, it is crucial to develop effective strategies about handling the societal impact of this crime with such long term effects. Give considerations to some of the facts surrounding this issue:

trauma during their military service. This number only represents veterans that sought services from the V.H.A. Considering the previous statement, it is not difficult to imagine that these numbers probably under represent the extent of this problem.

In our American culture, we place a great premium on men behaving with aggression in sports, military, business, politics and in the protection of his family. However, when that aggression goes awry and turns into violent sexual assaults against family members or peers, it is that same American culture that often crucifies the man. Allow me to clarify that it is not my position to excuse any sexual violence perpetrated against the family or anyone. However, the broad strokes of legal remedies rarely provide strategies that effectively prevent these episodes of assault nor do they treat the offender and victims for the mental disorders they are struggling with afterwards.

What is also heartrending is that same aggression has been fostered in many of our daughters that have also become violent and sexual predators as well. One of the fastest growing populations in our prisons today are our young women. These women also make up a large portion of those sexually assaulting and re-victimizing prisoners in state prisons.

Terry Frieden, CNN Justice Department Producer reported in a study that “sexual assault crimes committed within our correctional facilities can have devastating consequences for individual victims and for communities far beyond our jails and prisons,” Attorney General Eric Holder said in a written statement.

Unfortunately those devastating consequences have contributed to a multitude of married couples that struggle with intimacy issues as a result of sexual abuse.  The scope of that abuse is varied and seriously under-reported.  Additionally, it would be impossible to provide a” one size fits all” solution for this problem. My hope in this article is to provide insight and hope on a very small scale in comparison to the size of this problem.

Having counseled a large number of men and women, I found sexual abuse occurrences almost common

place in the childhood of many of those I served as well as in adulthood of those that served prison terms. Those giving voice to this problem must be amplified in order to provide the appropriate level of resources and strategies aimed at preventing sexual abuse and the long term effects of this trauma.

For the sustainability of our legacy and generations to come, we must strive to provide comprehensive strategies for healing and effective interventions to help these survivors to avert their becoming offenders or self destructive.

Meredith Maran shares in her well written article “When a Sexually Abused Child Weds”
“Untreated sexual abuse,” says Padma Moyer, MFCC, a San Francisco therapist who works with adults survivors of incest, “is a time bomb. Sometimes it ticks so quietly that even the victim doesn’t hear it. But if it isn’t defused, eventually there’s an explosion.”

When you add these survivors to the populations of military and/or prison populations it often increases their probability of becoming re-victimized. My wife, Dr. Margaret Jamal, frames this phenomenon in her book “When Girls Don’t Tell” as Revictimization.

Maran also shares that “many women who were abused perpetuate the cycle, not necessarily by molesting their children, but by putting them at risk. “If a female survivor’s feelings and memories remain unconscious,” says Ms. Moyer ,”and she doesn’t examine the family dynamic in which she grew up, she may choose a husband like her perpetrator, and create a family like her own family. In that way, she may inadvertently lay the groundwork for her children to be abused.”

Additionally, Maran profiles this tragic truth: “Many incest survivors have “flashbacks” while making love, says Julie Robbins, LCSW, a therapist specializing in child and adult survivors of sexual abuse. Women who had orgasms while being abused as children may punish their bodies for “enjoying” the abuse, becoming non-orgasmic, obese, or anorexic as adults, she says.”

For some, the whole basis for trusting someone has been shattered and their anger, still unresolved, seems to erupt unprovoked at their spouse. For others, their identities have been shattered to the point that they lack the ability to integrate into social settings without violent outbursts of profanity and behavior that erupts like a nuclear bomb.

Marital Intimacy is facilitated through selflessness. Often the woman or man that was abused has developed patterns of distrust for every partner including themselves. Healing is possible and trust can and must be restored. However,  both require unconditional love and patience. Many require professional help and/or peer group settings to help them address nightmares, flashbacks and identity issues as well.

As a Christian that is extremely grateful for the innumerable amount of answered prayers that my Heavenly Father continues to facilitate,  I recommend prayer as a constant for any strategy to deal with restoring intimacy beyond sexual abuse. Personally, I believe that it is easier to place your hope into your Creator than in people that we often place unrealistic expectations on. God will not disappoint and is the healing balm you need to address this very deeply rooted issue.